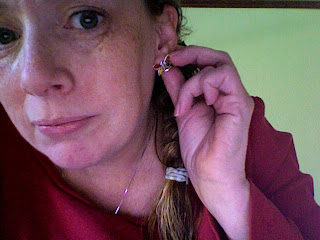 First... let's all ignore the fact that I look like I am 92-year-old hippy in this picture.
Now on to the post, which falls into the category of "cute kid stuff."
Carlie went on a field trip yesterday, to OMSI. It was all very exciting. In any event, she took money for the gift shop, because she had a hot $20 burning a hole in her pocket, which she earned by cat-sitting last weekend.
She put her $20 in an envelope, wrote her name on it, and was going to give it to her assigned field trip chaperone to hold on to until it was time for the wonders of the gift shop. But when we got to school, she panicked because she forgot the money! At home! Oh no!
I gave her another $20 bill and told her she could pay me back later. I also reiterated the discussion we had had earlier, that $20 was a lot of money to spend at a museum gift shop, and that she should really think about her purchase and not just blow the money for the sake of buying something.
Fast forward to the end of the day, when I pick her up at school, and she hops in the car completely full of post-field-trip euphoria, and she announced that she bought me a birthday present! Do I want it right now? Since I am driving, I tell her let's wait until I get home.
When we got home, she presented me with the lovely pair of butterfly earrings that you see in the above photo. How adorable is that, that she not only spent her own hard-earned cash on earrings for mom, but that she is just bursting with pride that she did it? She told me no less than four times that she "had the receipt," in case I want to exchange them. Because she's a very mature shopper and knows that is the thing to do.
Later that afternoon, as we are clearing the dining room table, I can't find the original "Carlie" labeled envelope with MY $20 in it. And I ask her, hey, where is that? And guess what? She didn't forget it at home after all! She had it in her backpack the whole time, ha ha, isn't that so funny?
So in summary: I sent my child on a field trip with $40 cash and received a $36 pair of crystal butterfly earrings for my birthday. There is something that is not quite right about this scenario.
Posted by Shana at 1:34 PM

Not right, but still a sweet thought...

Oh dear. This sounds like something my daring daughter would do.

Do you have a receipt for that braid?

You needed those earrings after what you've been through, and she knew it. Great kid!

What a sweet daughter you have!

She kept the receipt because she's a very mature shopper plus she witness what happens when you don't keep the receipt a la Target.