To Friend, or Not To Friend 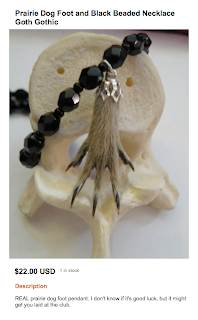 Regretsy... how I love thee
I'm in bed, day two, semi-sick. I say semi-sick because I am, at this point, feeling pretty much fine. Unless I make any sudden moves. I'm having a revisit of the labrythitis that I had at this same time last year. Freaky, no?
Yesterday, the room was spinning and I ran into the door frame every time I got out of bed. Today, nothing is spinning as long as I make no sudden moves. I did see the doctor yesterday, got an Rx refill, and the good news is I pretty much am not going to die. So yay!
24 hours spent in bed in a lovely/horrible/lovely thing. I did a lot of Internet goofing around. And a lot of OH MY GOD, I HAVE SO MUCH TO DO, I CANNOT JUST LAY HERE FOR ONE SECOND LONGER. And then I'd attempt to get up and do something, and the floor would drop out from under me, and my stomach would have that feeling that you get at the tiptop of the highest plummet on a roller coaster as you start to shoot straight down, and, yeah, back to bed and the Internet. Also, OH MY GOD, I MISS CABLE TV. There, I said it.
My most fabulous Internet discover was the website Regretsy. It's all of the most horrible things available on Etsy, with snarky commentary that is hysterical, wherein hysterical = seriously fucked up hilarity at the expense of others. Just what the doctor ordered!
My second most interesting Internet discovery is the contact information for a former best friend who totally broke up with me without saying a word a couple of years ago and I've never gotten over it. This was a friend made in adulthood, and we were very close. We spent a lot of time together, she was beloved by my entire family, and all of the things that the term "best friend" implies, like shopping, and girls' weekends, and dinners and drinks and movies and sharing the past histories of every boyfriend either of us had ever had. You know, best friends.
And then one day she disappeared. I mean seriously dis-a-fucking-eared. Moved into a new apartment with a new roommate and did not return phone calls. I knew she was not abducted or missing because we had some friends in common that would see her here or there. But she absolutely refused to respond to any contact from me.
One rumor floated was that she had joined AA and I was a bad influence, what with my glass of wine with dinner and beer with pizza heavy partying lifestyle.
I got mad, stopped reaching out, assumed that whatever was going on with her, she needed to work it out on her own. I heard a rumor that she'd moved out of town. We haven't spoken since I'm guessing about 2005.
So I randomly came across the web site for her new business in a town about an hour away from here. Apparently she's moved. I'm tempted to try to get in touch, but don't know if I should or if I should let it go.
Maybe I'll go back to Regretsty and send her a nice gift. Maybe I'll shoot her an email. Maybe I'll friend her on Facebook. Maybe I won't.
WWTBD? (What would the blogosphere do?)
Posted by Shana at 9:56 AM

Let it go. I had the same kind of thing happen to me. I got back in touch with that friend and now I'm regretting it.

Sometimes a break up is mutual and you just don't know it.

IMHBO (in my humble bloggy opinion)

I'd let it go. I had some similar weirdness (close friend from college dropped me years later) and did the FB friend thing and blogged about the FB weirdness and then got into some hard core FB messaging over past hurts and shit (because apparently my blog had a spy-from-past-life).

I would say I'm totally over it, but here I am a regular commenter and I'm going all anon for this JUST IN CASE. Spies, paranoia, it's all so fun!

1. Feel better.
2. Holy cow, thanks for the regretsy link, totally made my world a better place.
3. Only friend ex-friends if you're sure their lives turned out horribly. A little schadenfreude is good for you.

I totally understand the temptation to show back up, but you know you probably shouldn't.

I once read an article about best friends, and something unbelievably awful happened to the author of the article, and her best friend? Never called. Never sent a note. Just disappeared. It's like she was afraid the terrible thing that happened was contagious or something. That article has haunted me.

Anyway. Tomorrow I blog about your Bumpit. I just came over to link to you and got wrapped up in the world's longest comment.

I'd let it go. You have no idea what kind of Pandora's box you'd be opening if you tried to make contact.

Damn you to hell for providing that link to Regretsy. I could totally waste a week on that site. I am going to unfriend you on Facebook to prevent any similar future distractions.

Well...not really, because I love you too much. So please don't contact this old friend, because I want your time shopping, and girls' weekends, and dinners and drinks and movies and sharing the past histories of every boyfriend either of us had ever had. Mwah!

I had no idea you guys were that good of friends. Now I'm tempted to look her up. I think I will, because I've got all kinds of crap to work on and working on it really doesn't sound very fun.