When we decided to downsize to a condo from a larger home in 2009, we weighed the pros and the cons. Less space but smaller utility bills. No yard, yet no yard work. Losing vintage charm, but gaining modern convenience. In other words, we thought this shit out.

Once of the pro/con items that didn't seem significant was the garbage situation. In our old house, we had curbside pickup for garbage and recycling, one day per week. In the condo, we have a dumpster for garbage, plus dumpsters for recycling, that we can use any/every day of the week. We have to walk a skosh farther than the curb, but all in all, not a big deal.

Something that I did not anticipate was my husband's transformation into a dumpster diver. There's a little area adjacent to the dumpsters, just empty space, where people put "things" that seem a little too "good" for the dumpster, and apparently other people take them. Kind of like a sharing table. I've seen a nice-looking highchair sitting there, big empty rubbermaid bins, even a computer monitor, just sitting there, discarded, next to the dumpster, but nothing that has ever tickled my fancy.

What I'd never seen was a plant. Which is okay, because I've never met a house plant that I can't kill. But the other day, apparently a plant appeared at the dumpster, and by the end of that day, the plant was in my house, courtesy of Tim, who apparently forgot that bringing a plant into our house is the kiss of death. Also, for some reason, this is all my fault? I'm the plant killer? I don't understand how he brings a plant in and now it's "my" plant, but that's another post...

Anyway, here's the plant. A palm of some kind. A perfectly nice plant, I'm sure. Whatever. 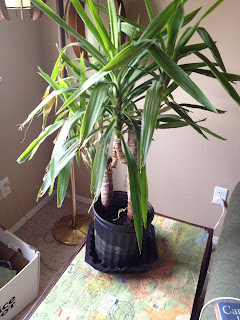 The plant needed something beneath it to catch water, and apparently my husband has no idea how much a Demarle fluted moldhttp://shop.demarleathome.com/categories/1039622269-flexipan-molds/products/879818044-fluted-square-mold costs, because that's where I found my pan. 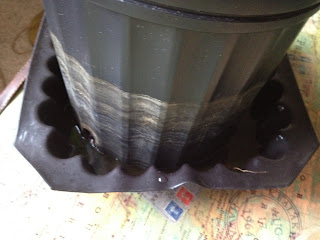 I noticed that our "special" kitty, Buffy the Mouse Slayer, was very interested in the plant. She's the biggest pain in the ass cat in the history of cats, fyi, but she is quite pretty. And we all know that pretty girls get away with pain in the ass shit that us regular girls just can't pull off. Again, a story for another post... 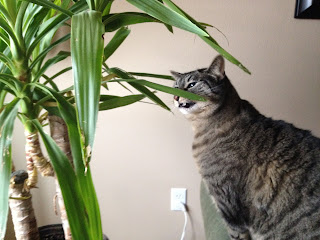 And now we know why house plants cannot survive in our home environment. Apparently they are being molested by Buffy. 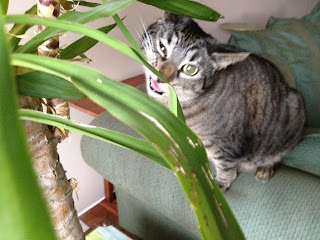 And hopefully palms are not poisonous. And by "hopefully," I mean that if they are poisonous they are fast-acting and do not induce pre-death barfing. JUST KIDDING. Pretty much. Not really. 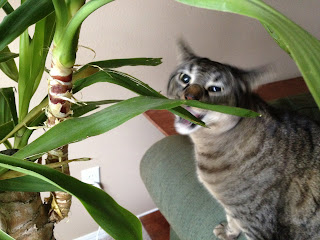 And thus ends Tim's foray into the world of dumpster diving. And thus ends the notion that it's me who kills the house plants.
The end.
Posted by Shana at 7:12 AM

i never thought i'd have fake plants-- my mother was a florist for heaven's sake, but i can't keep plants alive. there are no cats in this house either.